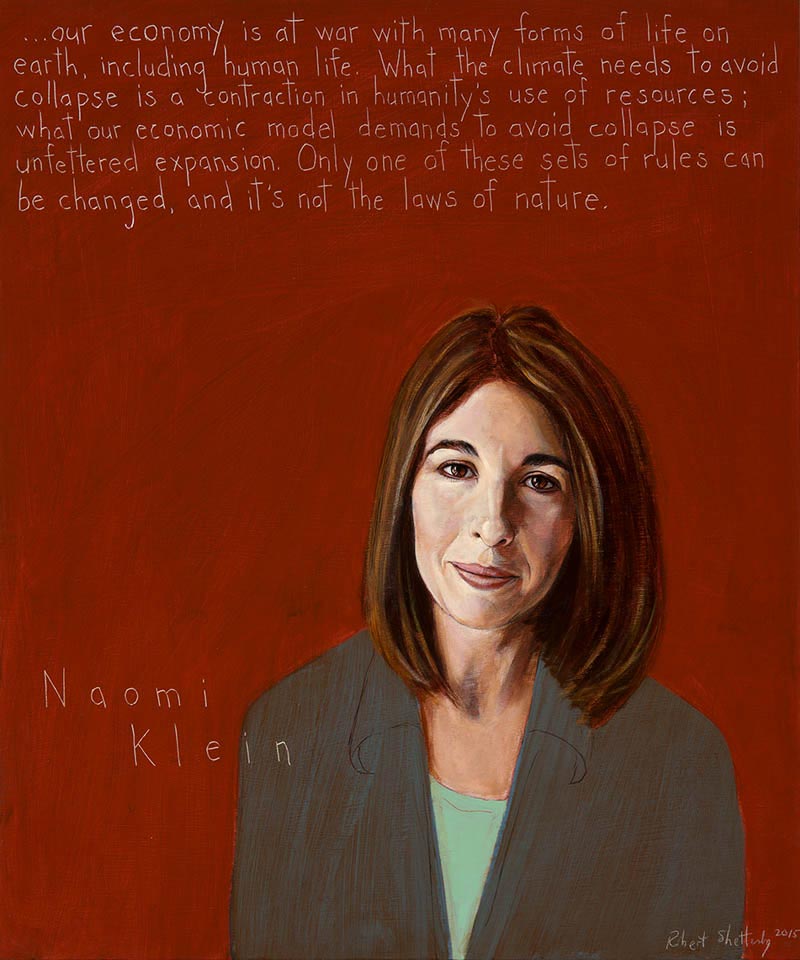 One of the world’s most powerful voices against capitalism’s negative impact on human life and the earth’s ecosystems, Naomi Klein was born to American parents in Montreal on May 8, 1970.  Her award-winning journalism has appeared in The Nation, The Guardian, and Harper’s magazine.  She has also published four international bestselling books.

Klein grew up in a family of activists. In 1967, her parents left the United States for Canada in protest of the Vietnam War. Her mother was a feminist filmmaker and her grandparents at one time were communists.

As a young person, Klein’s interests chafed with those of her socially engaged family. Rather than joining her parents in activism, she set out to be a typical teenager, spending her time at the mall, ogling designer labels. But Klein experienced an awakening at age 17 when a severe stroke disabled her mother. Instead of starting college at the University of Toronto, Klein spent a year caring for her mother. In 2000, Klein told The Guardian, “I think that’s what stopped me from being such a brat.” She also spoke about her transition from disengaged teen to socially engaged journalist:  “I know the only way that I escaped the mall–which is not to say that I don’t ever go, or enjoy it–the only way I got consumerism and vanity into a sane place in my life, though I don’t think we are ever rid of them, was just by becoming interested in other things.”

Klein’s omnivorous, interdisciplinary interest in other things has made her a primary voice on the destructive effects of unfettered capitalism.  Her first book, No Logo (1999) addressed corporate branding that targets youth, limits consumer choice, and generates global profits that depend on sweatshops and abusive working conditions. Klein’s focus on the resistance to social injustice and the successes of these justice movements makes her books both hopeful and successful. In No Logo, Klein offers examples of counter-branding movements as a form of social activism.

Her second book, Fences and Windows: Dispatches from the Front Lines of the Globalization Debate (2002), collected her articles and speeches about the anti-globalization movement’s protest events and interactions with law enforcement. Klein uses fences and windows as metaphors for the limitations and opportunities for the sharing of new ideas that can break free from the corporate-dominated economy. In The Shock Doctrine: The Rise of Disaster Capitalism (2007) she details how libertarian free market policies that exploit citizens have been put into practice at times when citizens are least able to effectively work against them. And most recently, Klein published This Changes Everything: Capitalism vs. The Climate (2014). Here she shows how the same capitalist forces she wrote about in No Logo are also responsible for climate change. Continuous consumption, mega-mergers, and trade agreements drive our growth economy and increase the CO2 and methane emissions that have the potential to change the world’s climate, geography, and environment irrevocably. But even here Klein offers hope, believing that a rapid adoption of renewable energy would not only save the climate, but would positively address social and economic inequalities around the world as clean energy adoption creates stronger communities, sustainable jobs, and more regulated industry with less emphasis on constant growth.

In 2015, Klein spoke to Der Spiegel about the need for major policy change to limit CO2 emissions, insisting that the small changes citizens have been encouraged to make are not enough to counter the effects of industrial capitalism. According to Klein, “when shopping as a way of life is exported to every corner of the globe, that requires energy. A lot of energy.” As a result of this high energy use, “we need a dramatic change both in policy and ideology, because there is a fundamental difference between what the scientists are telling us we need to do and our current political reality. We can’t change the physical reality, so we must change the political reality.”

As part of her work toward changing the political reality, Klein sits on the board of 350.org, the organization founded by truth-teller Bill McKibben to channel grassroots action against climate change. According to their website, “The number 350 means climate safety: to preserve a livable planet, scientists tell us we must reduce the amount of CO2 in the atmosphere from its current level of 400 parts per million to below 350 ppm.” 350.org does practical work to lower carbon emissions in almost every country in the world. They fight coal power plants in India and the Keystone XL pipeline in the U.S. and encourage public institutions everywhere to divest themselves of fossil fuel related businesses.

Klein says that we can’t wait on governments and businesses to do the right thing. Thinking back to a long line of American activists, she says “…in the US, all the major legal and social transformations of the last 150 years were a consequence of mass social movements, be they for women, against slavery or for civil rights. We need this strength again, and quickly, because the cause of climate change is the political and economic system itself.”