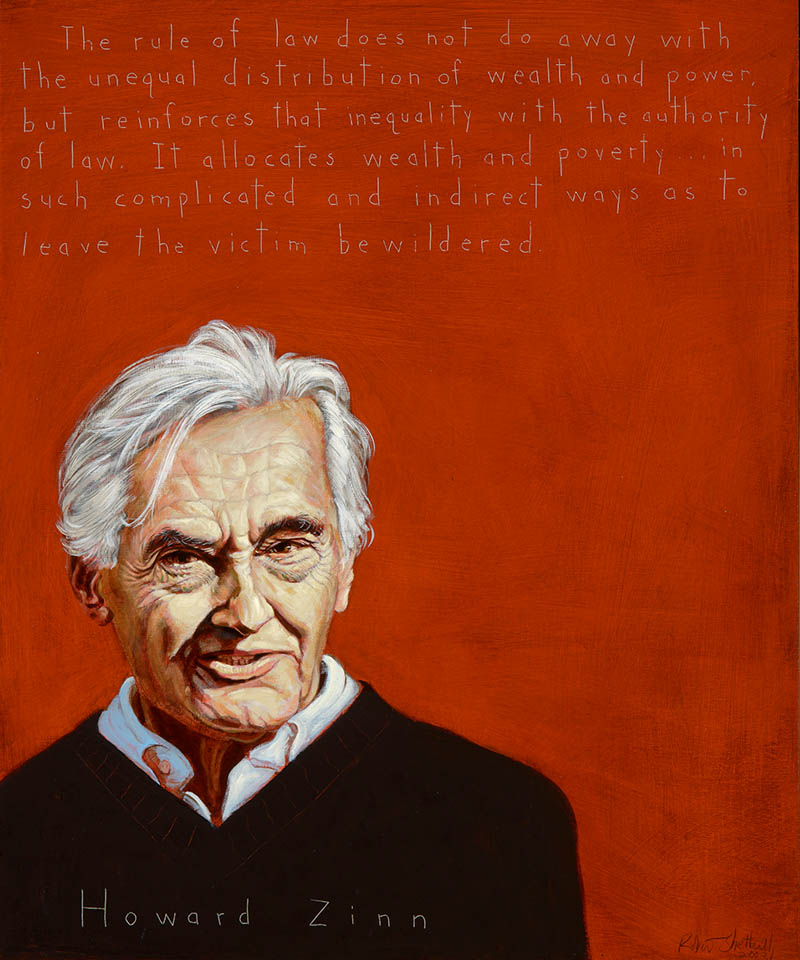 “The rule of law does not do away with the unequal distribution of wealth and power, but reinforces that inequality with the authority of law. It allocates wealth and poverty in such calculated and indirect ways as to leave the victim bewildered.”

Howard Zinn was born into a working-class family in Brooklyn, New York, and, though he had few formal educational opportunities, he developed a strong social consciousness while working as a shipfitter and avidly reading the novels of Charles Dickens. Flying bombing missions in World War II shaped his opposition to war. After military service he earned a doctorate in history at Columbia University and then taught at Spelman College in Georgia where he was active in the Civil Rights movement. In 1963 he moved to Boston University and became a prominent, outspoken critic of the Vietnam War.

Zinn is best known for his history of America through the perspective of “those outside of the political and economic establishment,” A People’s History of the United States: 1492-Present (1980, revised 1995). To his death in 2010, Zinn remained an active advocate for the underclass, a proponent of world peace and an articulate critic of corporate power and greed supported by governmental collusion.

“We need new ways of thinking,” said Zinn. “We need to rethink our position in the world. We need to stop sending weapons to countries that oppress other people. We need to decide that we will not go to war, whatever reason is conjured up by the politicians or the media, because war in our time is always indiscriminate, a war against innocents, a war against children. War is terrorism, magnified a hundred times.”

“We cannot be secure by limiting our liberties, as some of our political leaders are demanding, but only by expanding them…We should take our example not from the military and political leaders shouting ‘retaliate’ and ‘war’ but from the doctors and nurses and … firemen and policemen who have been saving lives in the midst of mayhem, whose first thoughts are not violence, but healing, and not vengeance, but compassion.”