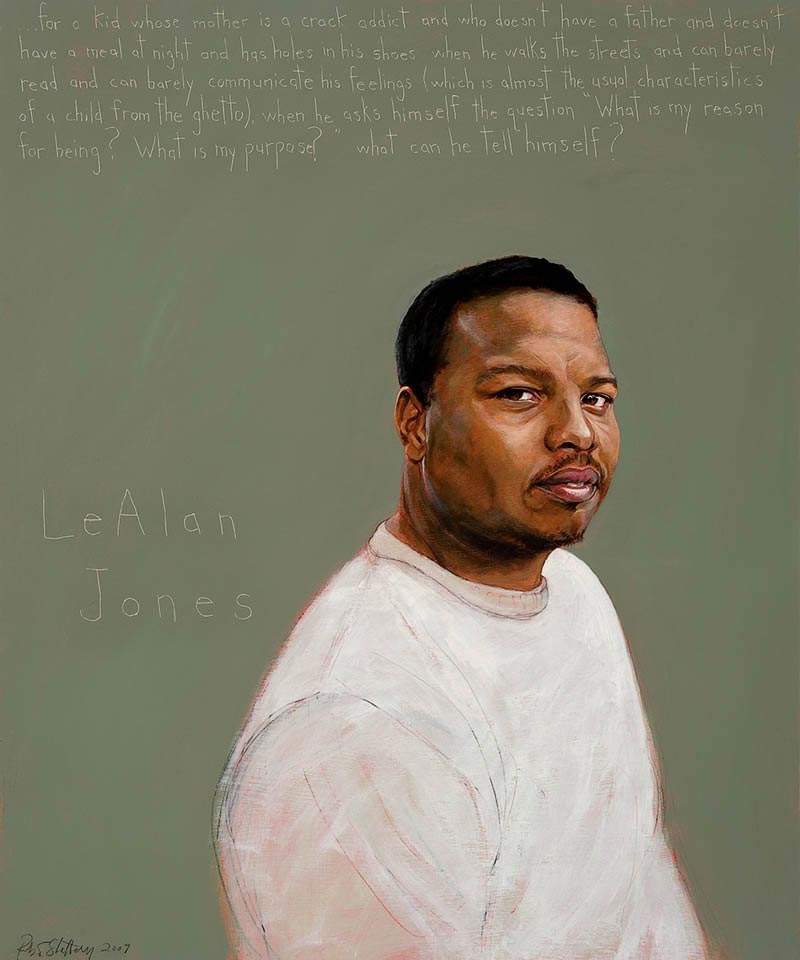 “…for a kid whose mother is a crack addict and who doesn’t have a father and doesn’t have a meal at night and has holes in his shoes when he walks the streets and can barely read and can barely communicate his feelings (which is almost the usual characteristics of a child from the ghetto), when he asks himself the question “What is my reason for being? What is my purpose?” what can he tell himself?”

In 1993, LeAlan Marvin Jones was a thirteen-year old reporter for National Public Radio. The documentary he helped produce became one of the most acclaimed pieces of audio-work in the history of Public Radio. It detailed the lives of two young-men–LeAlan Jones and Lloyd Newman–growing up in the inner city of Chicago and the obstacles they faced as they tried to transcend their circumstances.

“Ghetto-Life 101” received some of the most prestigious awards in national and international journalism including the Prix-Italia in 1994. (See resources to listen.)

In 1996, Jones and Newman produced a new work entitled “Remorse: the 14 Stories of Eric Morse”. The new set of interviews dealt with the murder of a five year old boy, Eric Morse, by two other boys, ages 10 and 11 in the Ida B. Wells housing development in Chicago. This piece was awarded the George Foster Peabody and the Robert F. Kennedy Grand-Prize (the first non-print journalism to garner the prize), also making Jones, 17 at the time, the youngest recipient of both.

Jones´ documentaries were transcribed and turned into a highly regarded book entitled, Our-America: Life and Death on the Southside of Chicago. Jones later produced a follow-up  documentary with the BBC-World Services, “Out of the Ghetto”.

Jones says that conditions have continued to deteriorate in his home neighborhoods: “I have three people within my immediate family that are men that have come home within the last 24 to 36 months from being incarcerated. They are tired of going to jail… But there are no jobs. What service can they provide? My belief is those individuals coming home, these ex-felons, have more credibility to stop the violence in the inner city than the police do. It is their sons and nephews and their immediate families that are being the provocateurs of that violence. But if we are asking them to stop crime, what incentive are we providing them to do that?”

LeAlan Jones has been a contributor to the BBC World Services, which has an audience of 150-million people globally. He has been the legal-guardian for his two teenage nephews for the last 7 years and a varsity linebacker coach at Simeon Career Academy in Chicago.

LeAlan says that he tries to live a life of value: “Value is understanding life, sacrifices, and that true equity is derived from enriching the world with genuineness.”

In 2010, Jones ran on the Green Party ticket for US Senator for the seat vacated by Barack Obama, saying, “This is the only thing I can do to have peace of mind. I am looking at a community that is suffering because of a lack of genuine concern from their leaders… This isn’t about who gets to stand behind the political elite at a press conference. This is about who is going to stand behind the people. What these leaders talk about and what needs to happen in the community is disjointed.”

From “Ghetto Life 101” to Senator? An Interview With LeAlan Jones