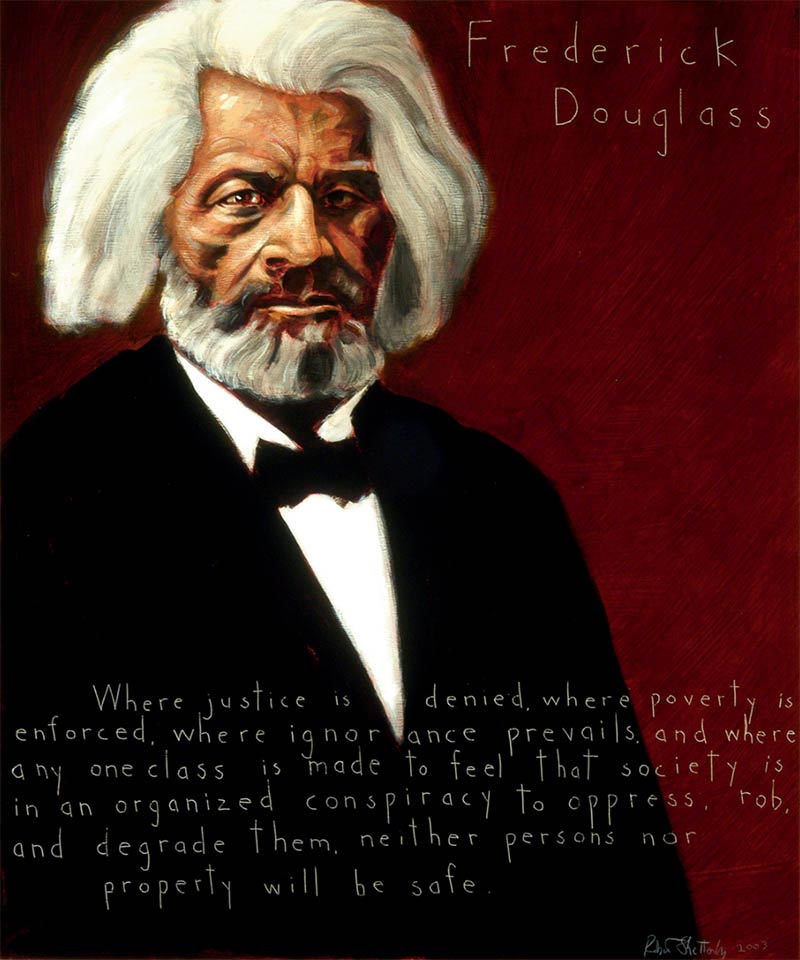 “Where justice is denied, where poverty is enforced, where ignorance prevails, and where any one class is made to feel that society is an organized conspiracy to oppress, rob, and degrade them, neither persons nor property will be safe.”

From Douglass´ speech in 1886 on the 24th anniversary of Emancipation, Washington, D.C.

Born into slavery on the eastern shore of Maryland, Frederick Douglass was sent at age ten to labor for a family in Baltimore, where his slave master’s sympathetic wife taught him the rudiments of reading and writing. With no formal schooling, Douglass educated himself by reading everything he could get his hands on. (He took his last name from the hero of Sir Walter Scott’s epic poemThe Lady of the Lake.) In his late teens he was hired out to a cruel master, whom he defied in an act of great moral and physical courage. Disguised as a sailor, the twenty-year-old Douglass escaped to New York and began his extraordinary career as an abolitionist orator, writer, newspaper publisher, and governmental official.

Douglass published three autobiographical books. The first and most influential of these is Narrative of the Life of Frederick Douglass, an American Slave, Written by Himself  (1845). The book focuses on the victims of slavery and the barbaric crimes inflicted upon them. It was an immediate success and today is considered a classic slave narrative.

A powerful physical presence and a superb orator, Douglass dramatically preached freedom and independence for slaves. His speech “What to the Slave is the Fourth of July?” may be the greatest statement ever of the moral and physical harm of slavery, while exposing the hypocracy of white people for their founding ideals.

He was an early champion of women’s rights and printed the motto “Right Is Of No Sex—Truth Is Of No Color” on the masthead of his abolitionist newspaper The North Star. His vision was also international in scope; he advocated fair treatment for working people in England, Ireland and Scotland. Yet his most important work continued to be in the United States.

During the Civil War, Douglass wrote: “We are fighting for unity; unity of idea, unity of sentiment, unity of object, unity of institutions, in which there shall be no North, no South, no East, no West, no black, no white, but a solidarity of the nation, making every slave free, and every free man a voter.”

What To The Slave Is The Fourth Of July?