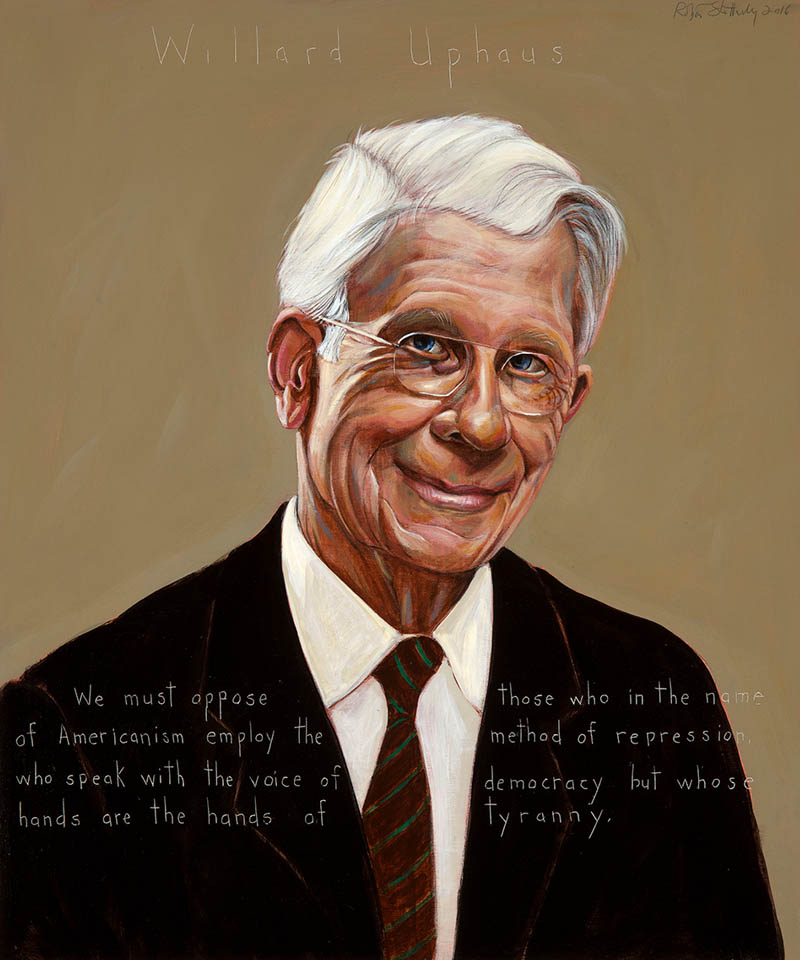 “We must oppose those who in the name of Americanism employ the method of repression, who speak with the voice of democracy but whose hands are the hands of tyranny.”

Willard Uphaus was a self-described “Christian Socialist” who devoted his life to defending the dignity of all people.

Uphaus said that he was motivated by a sincere desire to live out the religious principles he learned as a child. His life was devoted to breaking down barriers within and between people, which transformed him into a profound critic of American capitalism, but he said that the positions he took were rooted in his reading of the Bill of Rights and the examples of such patriots as Thoreau and Whitman. For following and defending these ideals, he would spend a year in jail for refusing to cooperate with the state during a McCarthy Era witch hunt.

Born on an Indiana farm of second-generation German-American parents, he earned a Ph.D. in religious education at Yale in 1925, and taught at the Vanderbilt University School of Religion in Nashville and at Hastings College in Nebraska. In 1930, he was asked to leave Hastings for teaching doctrines deemed ”extremely liberal and even radical.” Said Uphaus, “Although I had been a pacifist after World War I, and a liberal ever since, it wasn’t until the Depression overtook me that I had begun to sense the inherent economic and moral weakness of our system. Only then then had I begun to realize that, to be effective, the pacifist must not only practice non-violence but must also work for a different kind of society, a society based on the Christian ethic in which war would be unthinkable.” In his support, six department heads resigned in protest.

Beginning in 1934, Uphaus was executive director of the National Religion and Labor Foundation for 17 years, until the board requested his resignation in 1951 after he spoke at the second World Peace Congress in Warsaw and visited the Soviet Union. He co-directed the American Peace Crusade for a short time, but that organization closed its doors rather than go bankrupt trying to defend itself against the charge of being a Communist front under the McCarran Subversive Activities Control Act of 1950.

In 1953, Uphaus and his wife Ola took over the direction of the World Fellowship Center, an educational family camp and retreat center in the White Mountains of New Hampshire devoted to peace and social justice. Almost immediately, he came under the scrutiny of the state attorney general, who subpoenaed him to turn over lists of guests and staff to be combed through for connections with subversive organizations or the Communist Party.

Refusing on principle to expose his people to politically-motivated harassment, he was convicted of contempt in Merrimack County Superior Court and sentenced to be jailed for a year “or until purged of contempt.” In his final statement to the judge he said, “It is not my purpose to be defiant, stubborn, or put myself above the ruling of the court. But before God and my friends, I can do nothing else than say ‘no.’”

His real crime was putting into practice the idea that peace and brotherhood could only be achieved by bringing all kinds of people together to talk and discuss, to define themselves not by their differences, but by what they had in common.

On appeal the case went all the way to the US Supreme Court, which considered Uphaus v. Wyman on November 14, 1958. On June 8, 1959, the high court released its 5-4 decision upholding the lower court’s sentence. Uphaus served a year in Merrimack County Jail, in Boscawen, New Hampshire. His case was a cause célèbre; when he turned 70 behind bars, he received over 700 cards and letters from around the world.

He was released in December, 1960, and spent another ten years at the helm of World Fellowship, retiring in 1970 at the age of 80 and dividing the remaining thirteen years of his life between New Haven, Connecticut and St. Petersburg, Florida. His autobiography, Commitment, begun in jail, was published in 1963. He was awarded the Gandhi Peace Award for Promoting Enduring Peace and, on his 90th birthday, he received the Sacco-Vanzetti Memorial Award for Social Justice from the Community Church of Boston.

In his autobiography he wrote, “We all suffer from an over-all kind of callousness, a callousness that can tolerate poverty and unemployment beside special privilege, a callousness that permits the hurting of human beings because of their color or social status, that allows more emphasis to be put on popularity than on truth, more on bigness than on quality, and that is content with petty moralizing while gross evils are built into the very system under which we live.”