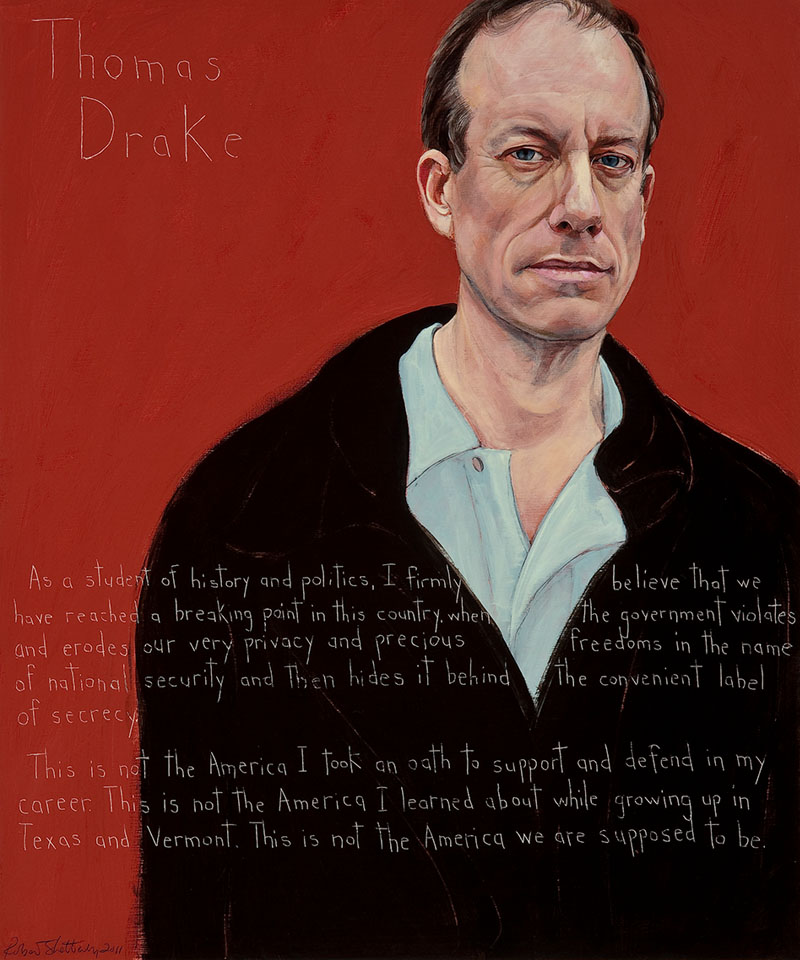 Veteran, Whistleblower at the National Security Agency : b. 1957

Thomas Drake made national headlines as a whistleblower at the National Security Agency and later, as the 2011 recipient of the Ridenhour Truth-Teller award.

A decorated veteran of the US Navy and the US Air Force, Drake was working as a senior official at the United States National Security Agency (NSA) when he became outraged at what he saw as corruption and criminal activity within the agency. Frustrated in his attempts to get answers via official channels, Drake anonymously went to the press with what he knew — an action that led to his indictment under the US Espionage Act.

A computer and linguistics expert, Thomas Drake worked in intelligence capacities for both the US Navy and US Air Force throughout the 1970s and 80s before becoming a government contractor in the Washington, DC area.

In 2001, Drake began full time work with the NSA, where he quickly became involved in a debate over a computer program. In the years leading up to 9/11, the NSA had struggled with a growing amount of digital data collected from around the world. The agency had initially considered using “ThinThread,”  a tool created by NSA mathematician Bill Binney, to sort through enormous amounts of electronic communication and pinpoint enemies outside the US. Because “ThinThread” would keep following data if it led into the US and to American citizens, it technically violated federal laws against monitoring communications without a warrant. However, Binney had devised a feature that would protect individual privacy by keeping the source encrypted until a warrant was approved.  Drake’s enthusiastically approved of Binney´s tool.

Despite the support of Drake and a small group of his colleagues, “ThinThread” was cancelled by NSA leadership shortly before 9/11 in favor of “Trailblazer,” a program developed by private contractors. Drake had deep concerns that “Trailblazer” would not only violate the Fourth Amendment (which guards against unreasonable search and seizure), but also that it would cost billions of dollars more than “ThinThread.”

By then, rumors had begun to circulate that the NSA was monitoring domestic communications. It was later revealed that then-president George W. Bush had approved a secret authorization for the NSA to intercept international phone calls and emails initiating from the US without a warrant. Soon after “Trailblazer” was approved, Binney retired from the NSA, fearing that big government and invasion of privacy was “subverting the Constitution.”

Drake, disillusioned by this turn of events, began working through official channels to complain about potentially unconstitutional decisions on behalf of NSA leadership.  He met with Diane Roark, a Republican staffer on the House Intelligence Committee of the US Congress.  By 2002, Roark, along with several ex-NSA members including Binney, had filed a report with the Department of Defense Inspector General detailing problems at the NSA. Soon thereafter, in what some saw as retaliation, Drake was transferred to work on a less important project.

In 2003, the NSA Inspector General admitted that “Trailblazer” was an “expensive failure” that cost more than one billion dollars, A report released in 2004 acknowledged that there were serious flaws at the NSA. However, the report was classified, which blocked media and public access to the information.

Frustrated with what he saw as ongoing crimes being committed against the American people, Thomas Drake decided to tip off a reporter with some unclassified information. After reading through the disclosure laws, Drake believed that, at worst, he could be fired for delivering unclassified material to a journalist. In 2005, he contacted journalist Siobhan Gorman at The Baltimore Sun, and began corresponding with her via encrypted email – though he was careful not to reveal secret or classified information. Gorman published several articles about waste and fraud at the NSA, which did not seem to reveal any information which could endanger national security.

Then, in 2007, armed FBI agents raided the homes of the people who had worked on the original Inspector General report, including Roark, Binney, and Drake. The FBI confiscated computers, books, and papers, and Thomas Drake was charged with “retaining information.” Shortly thereafter, he resigned voluntarily from his duties at the NSA.

At first, Drake cooperated with the investigation, even providing his computer password to the FBI. However, it soon became evident that the purpose of the investigation was to make an example of him. Drake was quoted in The New Yorker as saying: “I’ve got a bulls-eye on my back. I did not tell secrets. I am facing prison for having raised an alarm, period.” For more than two years after the FBI raid in 2007, Drake was threatened with jail time in the hopes of getting him to make a plea bargain.

In April 2010, US Government prosecutor William Welch officially indicted Drake, although by this time the conspiracy charges had been dropped. Drake was still indicted under the Espionage Act on the following charges: “Willful Retention of National Defense Information,” “Obstructing Justice,”  and “Making a False Statement.”  He was never officially charged with releasing classified information, though the prosecution tried to show that the documents Drake was accused of leaking were related to national defense. Drake refused to plead guilty, and refused to turn against the other “whistleblowers.” Diane Roark also refused to testify against Drake.

The case soon made international headlines, and the Government Accountability Project, a whistleblower non-profit, consulted on Drake’s defense. In the spring of 2011, the prosecution invoked the “Classified Information Procedures Act” to prevent jurors from seeing many of the documents in question.  Later, the government also withdrew evidence it claimed it needed to prosecute Drake – because it would have revealed information about the NSA’s telecommunications information collection program.

Unexpectedly, the US Government then dropped the ten original charges against Drake. This prompted an outraged response from Federal District Court Judge Richard D. Bennett, who called the government’s behavior — charging the defendant with serious crimes that could result in up to 35 years in prison, only to renege moments before the trial — “unconscionable”.

In June 2011, Thomas Drake accepted a misdemeanor plea for exceeding authorized use of a government computer. The case could help discourage future application of the Espionage Act in cases that do not involve spying.

Some see the case as a victory for whistleblowers, while others fear that whistleblowers may be more fearful of going to the press after seeing how government prosecutors derailed Drake´s life.

A father of five in his mid-fifties, Drake has had difficulty finding employment since his indictment, and was recently working at a Washington area Apple computer store. In April 2011, Drake was nominated to receive the Ridenhour Prize for Truth Telling, and in his acceptance speech he said: “I did not take an oath to support and defend government illegalities, violations of the Constitution or turn a blind eye to massive fraud, waste and abuse.”