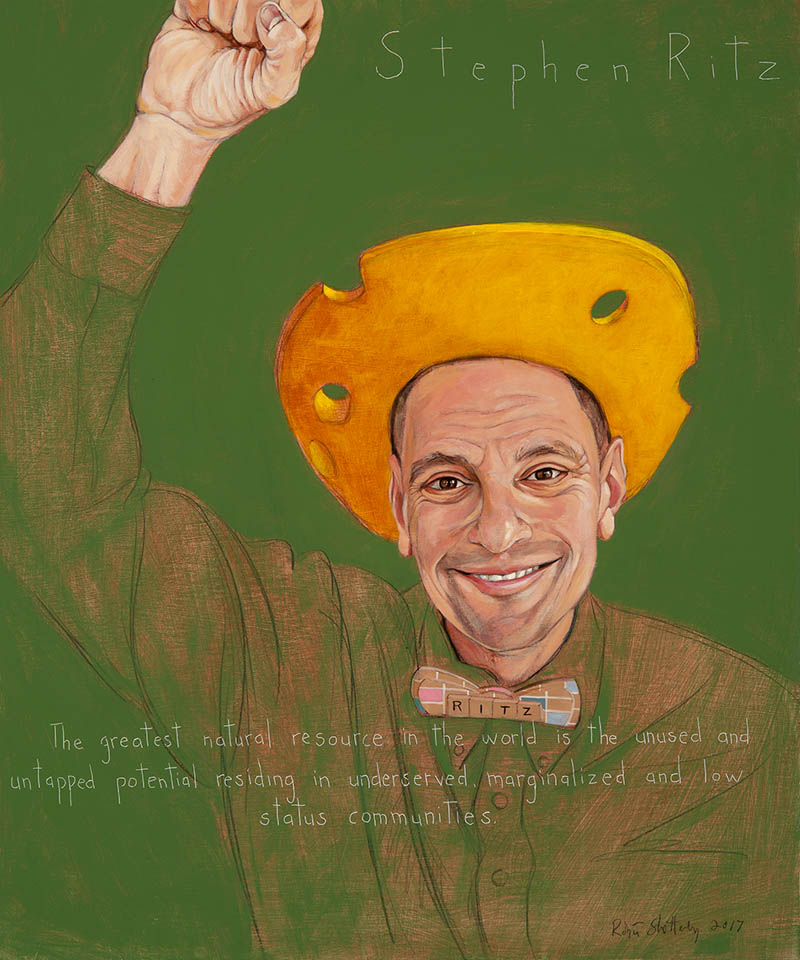 “The greatest natural resource in the world is the unused and untapped potential residing in underserved, marginalized, and low status communities.”

In the midst of the tall buildings, bright lights, and world renowned restaurants of the city that never sleeps and sports the nickname “The Big Apple”, exist food deserts. One of these, a part of the South Bronx where  45,000 people within a 8 block radius have no easy access to nutritious groceries, has become the laboratory for a hyperactive, former basketball player who’s using his cheerful enthusiasm to turn a desert into an oasis of healthy food. “I’m not a farmer. I’m a people farmer. My favorite crop is organically grown citizens,” says the tall, skinny guy wearing a floppy cheese hat, bow tie and “Si Se Puede” t-shirt. That’s educator, author, and urban farmer Stephen Ritz.

The son of immigrants, Steve Ritz discovered early on that any kid could learn if supported by a nurturing environment. When he became a teacher himself he sought out those considered to be the toughest cases, the poor kids, the special-ed kids, the kids who barely spoke English, and those with criminal records or from broken homes. To their classroom he brought faith in the idea that education could change lives, and, perhaps most importantly, high expectations. “We have to stop placing the blame on poverty,” he writes in his book The Power of a Plant. “Poor kids can rise to high expectations, but first you have to have those expectations.” After getting his Masters in Education from Arizona State University, Ritz would return to the Bronx where he grew up and got his start teaching and dive back into the schools responsible for educating the children of the poorest congressional district in the whole country. He and his students surprised people. They did so well that some of Ritz’s colleagues became resentful.

Part of his secret? Realizing that “if we were going to address the root problems that challenge children, we need to let children self-identify the problems they perceive as the impediments to their success,” writes Ritz.

The phrase “root problems” took on new meaning for Ritz in 2004. Not knowing what they were, Ritz stuck a box of daffodil bulbs under his classroom radiator. When the students discovered them in bloom, they were entranced. Soon landscaping and ornamental gardening became schoolwork for the newly minted “Green Team.” His gardening students were featured in the news and awarded the Golden Daffodil Award by the New York City Council. In 2005, they started growing vegetables. This marked the beginning of an empowering journey that Ritz has called “From Crack to Cucumbers.”

Now his students have grown more than 50,000 pounds of healthy vegetables. On the fourth floor of the 100-year-old school building in a neighborhood where, to quote the educator, Jonathan Kozol, “Nobody says we’re going to make [young people] less separate and more equal,”  lives a green house, better known as the Green Bronx Machine. That is where Ritz and his students plant, water, study, grow and produce vegetables that they share with the greater Bronx community. Ritz and his team of students built the first Indoor edible wall in New York City and his project based learning program has led to dramatic improvements in school attendance — from 40% to 93% percent. More impressively, 100% of students get passing grades.

So, where does the food go? “Zero miles to plate or to local shelters where kids are getting one to two meals a day,” says Ritz. And if you ask, he will tell you that he and his students are growing their way into a new economy. In one of his inspiring TedX talks, Ritz says, “Our park feeds hundreds of people without a food stamp or a fingerprint.”

In a poor corner of America where 37% of the population struggles with food insecurity and 59% of kids live below the poverty line, Ritz and his students are changing business as usual. He believes, “kids should not have to leave their community to live, learn and earn a better one”, and based on that belief and his brilliance they no longer have to.  The Green Bronx Machine promotes and disseminates the lessons he and his students have learned about growing good food.

It is fair to say, paraphrasing Ritz himself, that the most important seeds he has planted and seen grow and bloom are the young people right in his community were a series of “collisions, connections, and co-learnings” are transforming residents’ sense of place.