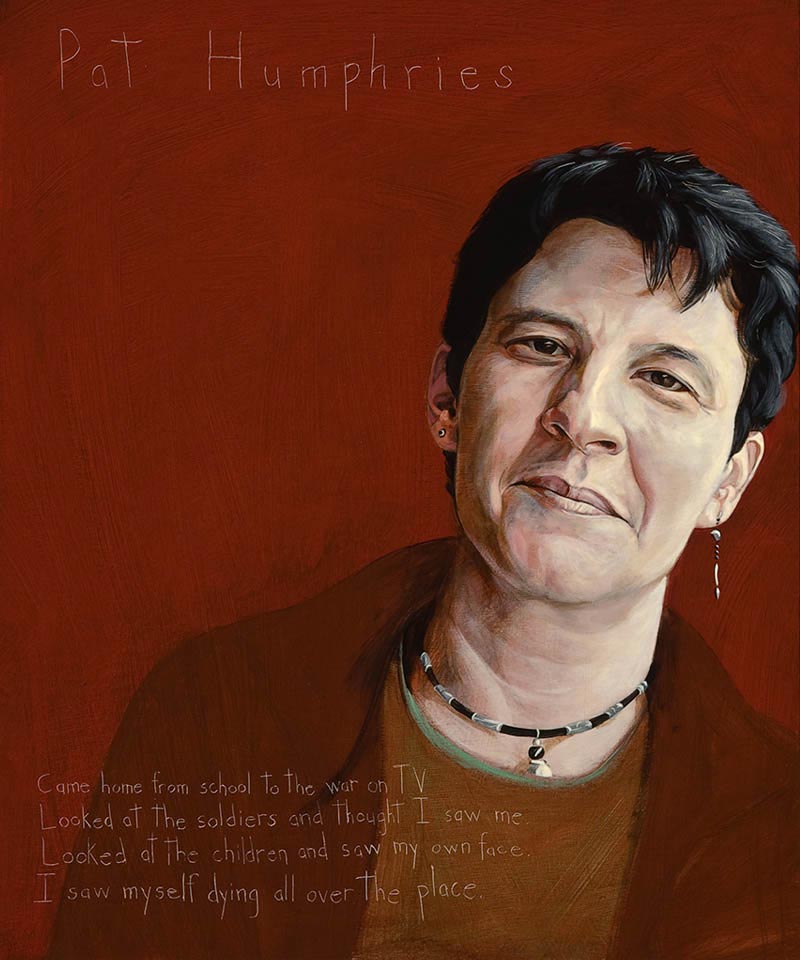 “Came home from school to the war on TV/ Looked at the soldiers and thought I saw me./ Looked at the children and saw my own face./ I saw myself dying all over the place.”

Think of calls for social justice, sung loudly rather than shouted. Songs to embrace, sing along with and even dance to. Songs to inspire courage, build community, and create peace. Songs by Pete Seeger, Woody Guthrie, and Pat Humphries – one half, along with Sandy O, of the activist duo emma’s revolution. This is Pat’s tale.

Pat Humphries was born in Ohio in 1960, not far from Kent State University. She started singing and playing guitar as a young child. In 1970, at an anti-Vietnam War demonstration at Kent State, where some of her sisters were attending school, the Ohio National Guard shot and killed four peaceful student demonstrators. It affected Humphries and her family personally, and at the young age of ten, triggered her dedication to activism.

As a teenager, Humphries traveled and performed with youth choruses and began playing in Cleveland coffeehouses, learning folk music. She left Kent State to pursue her music. As Humphries puts it, “the subject matter that I was singing about had been amply covered by other singers and I wanted to sing about something else. I left school, got a day job organizing arts events and started writing songs…I was affected by the feminist movement, the anti-nuclear movement, the farmworker boycotts, the lesbian and gay movement, the American Indian movement and the environmental movement.”

She composed “Never Turning Back” at a songwriting workshop. This song, still popular, became an unofficial theme song of the UN Fourth Conference on Women in Beijing in 1995; Pete Seeger called it “one of the best songs I’ve heard in 50 years”.

Humphries has written social justice songs for women, migrant workers, anyone whose voices and stories need to be heard. She has traveled across the country, and to Cuba and Nicaragua. In 2002, NPR played Humphries’ song “Swimming to the Other Side” on its’ program “All Things Considered,” and suddenly her name was in the national spotlight.

By this time, she had met Sandy Opatow (O), and they formed a duo. After trying to work out a name for their group, they turned to activist Emma Goldman (whose portrait is in this collection) for inspiration. Goldman had a fierce dedication to fighting for the rights of women, children, workers, and free speech. She also believed in everyone’s right to “free expression, to beautiful, radiant things.” Another phrase attributed to Goldman is, “if I can’t dance, I don’t want to be part of your revolution.”And it is in that spirit that Humphries and O became emma’s revolution.

Right after the 9/11 attacks, Humphries and Sandy O composed “Peace Salaam Shalom” (Peace in English, Arabic, and Hebrew), and have played it loudly ever since in protest of the Iraq war. Humphries said, “Clearly work had to be done in the wake of the bombing. There was a need of mutual understanding of what peace means – that’s at the heart of the work that we do.”

Humphries’ song “We Are One” was chosen as the theme for the 2003 conference in DCon the reunification of North and South Korea. emma’s revolution went to Korea with the conference organizers, and they had the song translated into Korean so they could perform it both languages.

Pat Humphries believes in the power of words and music as a tool in the struggle for justice. emma´s revolution played at the first ever Inaugural Peace Ball for President Barack Obama.