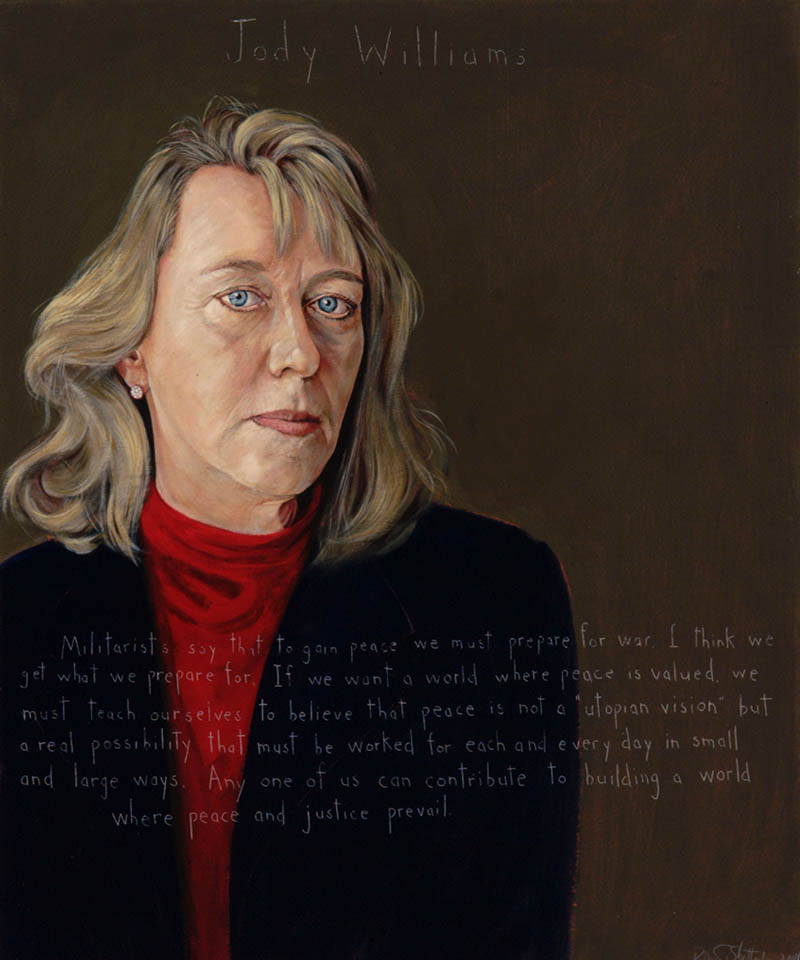 “Militarists say that to gain peace we must prepare for war. I think we get what we prepare for. If we want a world where peace is valued, we must teach ourselves to believe that peace is not a ‘utopian vision’ but a real responsibility that must be worked for each and every day in small and large ways. Any one of us can contribute to building a world where peace and justice prevail.”

In 1992, Jody Williams founded and coordinated the International Campaign to Ban Landmines (ICBL). The campaign, originally backed by six non-governmental organizations (NGOs), grew to represent more than 1,300 NGOs in over 85 countries. During this five-year period, Williams was the ICBL´s chief organizer, strategist and spokesperson, coordinating with other governments, the United Nations, and the International Committee of the Red Cross. In 1997, the campaign achieved its goal: an international treaty banning antipersonnel landmines, and Jody Williams was awarded the Nobel Peace Prize. She is only the third American woman to receive this honor.

Addressing the Treaty Signing Conference in Ottawa, Canada, Williams said: “It wasn’t until the voice of civil society was raised to such a high degree that governments began to listen, that change began to move the world, with lightning and unexpected speed.”

Jody Williams trained to be a “voice of civil society” both in formal studies and as an activist working to build public awareness about US policy toward Central America. She graduated from the University of Vermont and received a Master’s Degree in Teaching Spanish and English as a Second Language (ESL) from the School for International Training, Brattleboro, Vermont. She earned a second Master’s Degree in International Relations at Johns Hopkins School of Advanced International Studies. For six years she worked on humanitarian relief projects for El Salvador. She coordinated the Nicaragua-Honduras Education Project, which involved leading fact-finding delegations in the region. She has also taught ESL in Mexico, the U.K. and Washington, D.C.

Now widely recognized for her work, Jody Williams teaches, writes and lectures extensively. She is one of ten past Nobel Prize winners working with Peacejam “to inspire a new generation of peacemakers who will transform their local communities, themselves, and the world.”