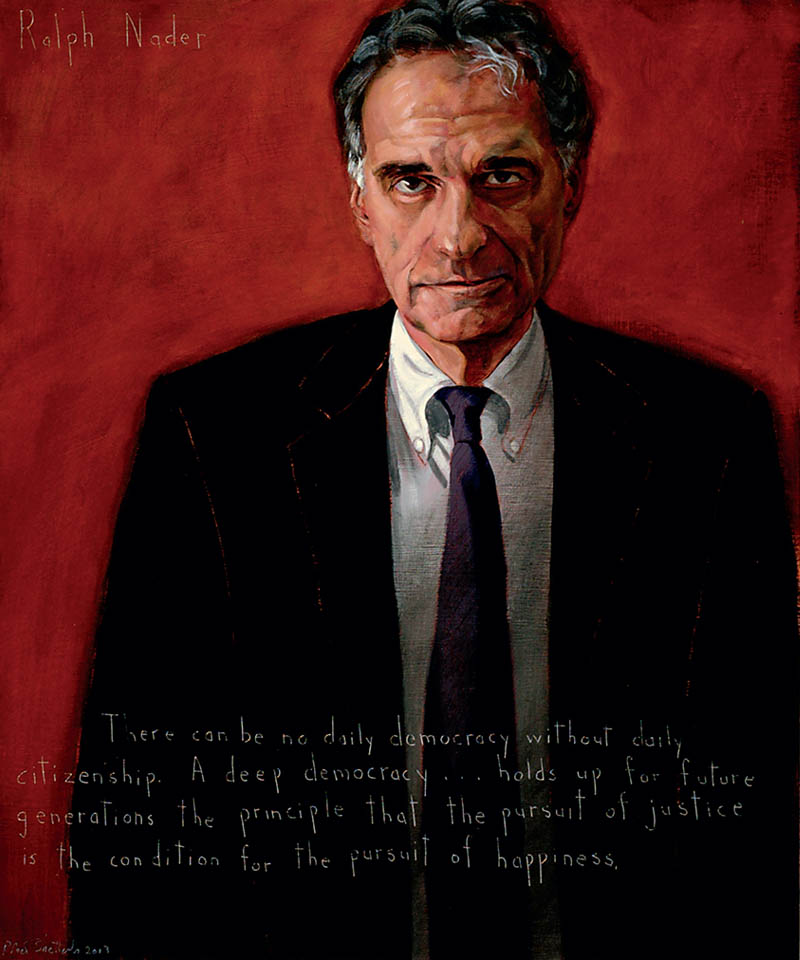 “There can be no daily democracy without daily citizenship. A deep democracy … holds up for future generations the principle that the pursuit of justice is the condition for the pursuit of happiness.”

Ralph Nader became famous in 1965 when his indictment of the American automobile industry, Unsafe at Any Speed, appeared in print, launching a series of Congressional investigations which led, ultimately, to widely accepted regulations such as federal performance standards for motor vehicles. Although Nader’s public prominence may have seemed like an overnight success, it was the result of years of research that started when he was a student at Harvard Law School.  In 1959, he began publishing his research with an article published in The Nation, “The Safe Car You Can’t Buy.” The industry, whose unsafe practices Nader identified, was quick to try to discredit him, but his austere, highly disciplined way of life did not yield the kind of compromising character flaws that his would-be detractors could use against him.

Nader was born and grew up in Winsted, Connecticut, the son of Lebanese immigrants. His father ran a restaurant and conducted lively discussions of public affairs with his customers. At a surprisingly young age, the studious Ralph read the early 20th Century muckrakers, writers like Upton Sinclair and Lincoln Steffens, and became aware of how the unchecked pursuit of wealth can lead to abuses of power. A key insight from the first book he wrote sounds this theme: “A great problem of contemporary life is how to control the power of economic interests which ignore the harmful effects of their applied science and technology.”

Since 1966, Ralph Nader has worked to pass at least eight major consumer protection laws, including the Safe Drinking Water Act and the founding of such regulatory agencies as the Occupational Safety and Health Administration (OSHA), Environmental Protection Agency (EPA), and Consumer Product Safety Administration. He has promoted better access to government with the Freedom of Information Act. He has founded many organizations to carry out his wide-ranging research and advocacy, the largest with a membership of more than 100,000, is Public Citizen. David Bollier, one of his biographers, points out that, “… a large number of Nader’s most significant triumphs—for new consumer rights, open government, and more humane business practices—have been so integrated into the culture that they are now taken for granted.”

The organizations founded and fostered by Nader have, in turn, trained new leaders to apply democracy to more and more aspects of human enterprise. Nader has declared: “Almost every significant breakthrough has come from the spark, the drive, the initiative of one person.”