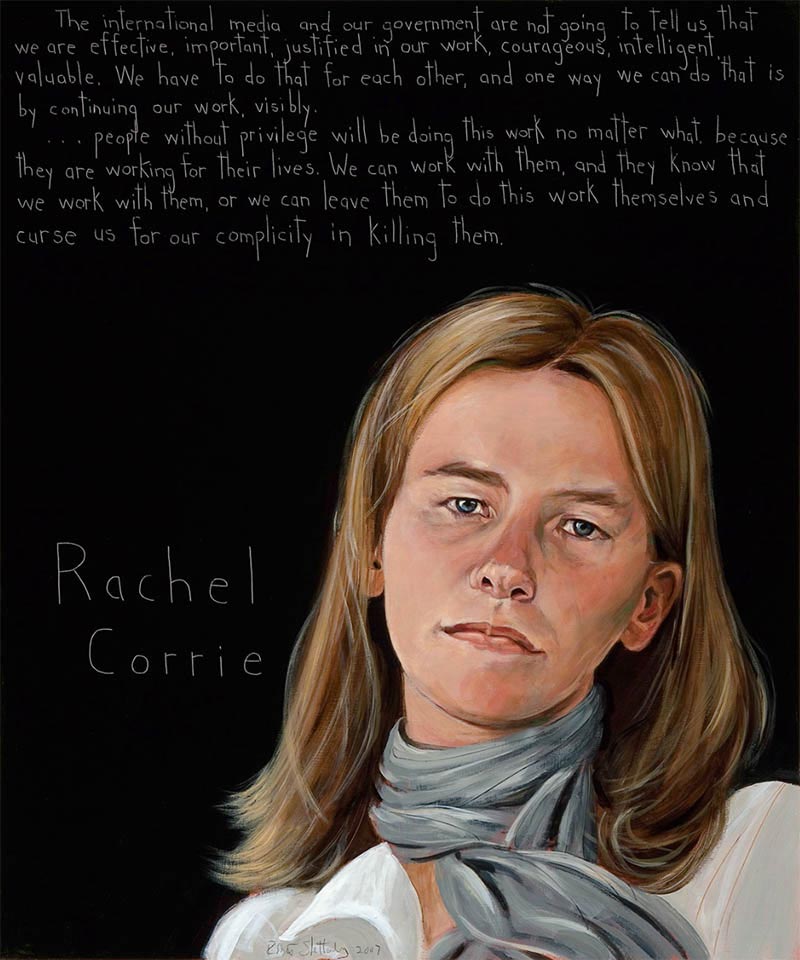 “The international media and our government are not going to tell us that we are effective, important, justified in our work, courageous, intelligent, valuable. We have to do that for each other, and one way we can do that is by continuing our work, visibly. People without privilege will be doing this work no matter what, because they are working for their lives. We can work with them, and they know that we work with them, or we can leave them to do this work themselves and curse us for our complicity in killing them.”

Rachel Corrie was a young activist whose life, at 23, ended abruptly on March 16, 2003 while she was working as a protester in the Gaza Strip. She grew up in Olympia, Washington, attended Capital High School and then The Evergreen State College. While in college, Corrie joined the Olympia Movement for Justice and Peace, and later, the International Solidarity Movement, or ISM.

The ISM, founded in 2001, looks worldwide for people to help with their nonviolent protests against the Israeli military in the West Bank. The organization seeks to pressure Israel and its Israeli Defense Force (IDF) into ending its occupation of Palestinian lands, using a number of nonviolent resistance tactics, such as violating Israeli curfews imposed on Palestinian areas, removing roadblocks placed by the IDF to isolate one village from another, and blocking military tanks and bulldozers.

Rachel Corrie went to Rafah in the Gaza Strip in January 2003 and received two days of nonviolent resistance training to assist in ISM activities. She was horrified at the destruction she found there. Homes were destroyed and people detained and killed on a daily basis. Rachel recorded what she observed and felt in letters and emails home to her family. In one email she wrote, “Now the Israeli army has actually dug up the road to Gaza, and both of the major checkpoints are closed. This means that Palestinians who want to go and register for their next quarter at university can’t. People can’t get to their jobs and those who are trapped on the other side can’t get home; and internationals, who have a meeting tomorrow in the West Bank, won’t make it.”

In another email, Corrie wrote, “Just feel sick to my stomach a lot from being doted on all the time, very sweetly, by people who are facing doom….Honestly, a lot of the time the sheer kindness of the people here, coupled with the overwhelming evidence of the willful destruction of their lives, makes it seem unreal to me.”

Rachel Corrie’s efforts to help the resistance movement cost her her life on March 16, 2003. She had placed herself between a Caterpillar bulldozer and a local home, trying to prevent the IDF from demolishing it. She was run over twice by the vehicle and killed.

After her death, The Rachel Corrie Foundation for Peace and Justice was founded to “support programs that foster connections between people, that build understanding, respect, and appreciation for differences, and that promote cooperation within and between local and global communities.” Actor Alan Rickman and writer Katherine Viner put together a play based on Corrie’s letters, journals, and emails called “My Name is Rachel Corrie.” It played in London in 2005, and after an initial postponement in the US, had a limited run Off-Broadway in New York.